Toyoko Imae is a scientist in a field of nanoarchitectures and nanotechnology, and she is especially focusing on the fabrication of hybrids and composites and the research of their physicochemical properties. She is also concerning to various materials such as amphiphiles, polymers, nanoparticles, carbon materials, porous materials, inorganic materials, etc. Green (energy) science, environmental science and life (biomedical) science are recently focused by her, and her representative investigations are summarized as below

1. Efficiency of hydrogen evolution reaction (HER) was evaluated with a small amount of platinum nanoparticles (PtNPs) immobilized on graphene oxides, carbon nanohorns (CNHs) and carbon nanotubes (CNTs) through dendrimer (Den)-mediated chemical reaction. The excellent HER, durability and stability of composite electrodes are due to chemical bonding immobilization of PtNPs on carbon materials and its substantial graphitized structure. Our reports clearly demonstrate that using low weight Pt-based electrocatalyst is the auspicious route for further development of prototype hydrogen energy/battery systems. Balamurugan Devadas, Toyoko Imae,* Electrochemistry Communications 72 (2016) 135-139.

2. An influence of carbon dots (Cdots) in conducting polymers (polypyrrole (PP) and polyaniline (PA)) were investigated towards high specific capacitance. The enhancement of specific capacitance and long-term stabilities of PP@Cdots and PA@Cdots were due to the synergistic effect of polymers and Cdots. This report indicates the remarkable capacitance intension and the desirable durability reinforcement of pseudo-capacitors by easy addition of less-conductive carbon material. Balamurugan Devadas and Toyoko Imae,* ACS Sustainable Chem. Eng., 2018, 6 (1), 127–134. The specific capacitance investigation was performed even for composites of carbon nanohorn (CNH) with PA and PP. The specific capacitance of PA-series electrodes was maximum (762 F/g at scan rate of 5 mV/s) at a weight ratio of monomr:CNH=1:3. Meanwhile, the specific capacitance (769 F/g at 5 mV/s) of PP electrode gradually decreased with increasing the content of CNH. These electrochemical results indicated that PA-series composites revealed strong synergy effect between PA and CNH facilitated by faster charge transfer. Both polymers were strengthened their cycling stability after hybridization with CNH. Chia Chi Chang and Toyoko Imae*, ACS Sustainable Chem. & Eng., 2018, 6, 5162-5172. 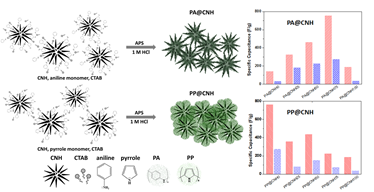 3. Massive-Exfoliation of Magnetic Graphene from Acceptor–Type GIC by Long-Chain Alkyl Amine: Graphene was prepared from a graphite intercalation compound (GIC) with an acceptor-type intercalator, FeCl3. The GIC was expanded to a few layers after the thermal treatment with long-chain primary amines. Then the expanded-GIC was sonicated to exfoliate the graphene sheets. The obtained material indicated a superparamagnetic property due to the remaining iron compounds. This approach is preferable for the mass production of graphene because of the mild reaction condition and the short treatment time for exfoliation. Moreover, the magnetization of graphene is useful for the magnetic-recovery, electromagnetic heating, and the other applications. (Masaki Ujihara,* Mahmoud Mohamed Mahmoud Ahmed, Toyoko Imae* and Yusuke Yamauchi, J. Materials Chemistry A, 2, 4244 – 4250 (2014).)

5. Selective capture of CO2 by poly(amido amine) dendrimer-loaded organoclays: Nowadays, carbon dioxide (CO2) has become a major environmental issue, because the increasing CO2 emission is thought to be a main contributor to global warming. Then, the growing interest of the scientists has been focused towards the ways that this gas can be trapped from emission sources, for instance, in an adsorption technique for effective CO2 capture from the air atmosphere. We have explored poly(amido amine) dendrimer-loaded clays loaded for capture and storage of CO2 (Kinjal J. Shah, Atindra D. Shukla, and Toyoko Imae,* RSC Advances 5, 35985-35992 (2015)). the capture and storage of CO2 were controlled rather the loaded dendrimer: The amine-terminated dendrimer loaded in cation-exchange clay selectively captured and stored CO2 but the carboxylate-terminated dendrimer in anion-exchange clay rather refused CO2 gas.

6. Renewable catalyst with Cu nanoparticles embedded into cellulose nano-fiber film: The utilization of co-friendly resources is the main issues which humans must consider in current situation, because we are losing natural resources so fast and bringing on environmental breakdown by necessity. A catalytic system was designed with nano-composites of Cu nanoparticles and cellulose nano-fiber (CNF). The uptake of active Cu nanoparticles into a CNF film was successfully achieved. The Cu-loaded CNF film showed the high catalytic activity towards the reduction of 4-nitrophenol, meanwhile the Cu-free CNF film had almost no-catalytic activity. The film was easily recycled, and its catalytic activity did not decrease significantly up to at least 10 cycles of the reaction. It was suggested that the Cu nanoparticles embedded in the CNF film efficiently promoted the catalytic reaction.Thus, this novel concept demonstrates its possibility to prepare the eco-friendly film-type catalytic system with a good selectivity. (Ramaraju Bendi and Toyoko Imae, RSC Advances, 2013, 3, 16279-16282) The Green chemistry described above must be promoted in a positive way.

7. Chemical- and Bio-modulation of Gold Nanoparticles, Their Plasmonic Properties and Development of Solution-based Nano-plasmonic Sensing Technique: Plasmonic property of metal particles is worthy of remarks because of its unique physical phenomenon and valuable applications. Gold nanostructures with “confeito-like shape” have been synthesized by a solution-phase galvanic reaction or in a solution including fruit juice. An ultraviolet-visible absorption spectrum showed surface plasmon bands at 320 to 530 nm and a broad absorption band from 650 nm to near-infrared region. These nanostructures constitute an active substrate material for the surface-enhanced Raman scattering spectroscopy. (Jadab Sharma, Yian Tai, and Toyoko Imae, Chemistry – an Asian Journal, 2010, 5, 70-73.) Meanwhile, we have successfully demonstrated the novel sensing technique for monitoring the variation of solution concentrations and measuring the effective dielectric constant in a medium by means of an ultra-small and label-free nanosensor, the mechanism of which is based on the localized surface plasmon resonance of gold nanorods. This promising sensing and analytical technique can be easily used for investigating the nano-scale variations of mixing or reaction process in a micro/nanofluidic channel or the biological interaction in the cytoplasm of the cell. (Fu Han Ho,Yung-Han Wu, Masaki Ujihara and Toyoko Imae, Analyst, 2012, 137, 2545-2548.) Biocompatible confeito-like nanoparticles are also intended to be synthesized and applied on the phototherapy through use of plasmonic property.

8. Advantages of Immobilization of Pt Nanoparticles Protected by Dendrimers on Multiwalled Carbon Nanotubes: Development of highly effective sensing systems is a universal desire owing to their worth. Pt nanoparticles (PtNPs) were synthesized in the presence of a poly(amido amine) (PAMAM) dendrimer as a stabilizer. Subsequently, PtNPs protected by dendrimers (DENPtNPs) were covalently immobilized on multiwalled carbon nanotubes (MWCNTs). PtNPs on MWCNTs dispersed with same aspect as the dispersion of DENPtNPs in water. Remarkable advantage is apparent from the enhanced electrochemical behavior of CNT/DENPtNPs loaded on the gold electrode. PtNPs promoted the electron transfer of MWCNTs and dendrimers contributed to uptake of redox materials, indicating the possible application of these hybrids as electrochemical sensing systems. (Ampornphan Siriviriyanun and Toyoko Imae, Phys. Chem. Chem. Phys., 2012, 14, 10622-10630.) Effective electrochemical detection of methanol oxidation has been confirmed using electrodes with dendrimer-protected platinum nanoparticles and carbon nanotubes. (Ampornphan Siriviriyanun and Toyoko Imae, Phys. Chem. Chem. Phys., 2013, 15, 4921-4929). These electrodes are going to be applied for detecting contaminant pollutants and biological reactions.

9. Effect of Au nanorod assemblies on surface-enhanced Raman spectroscopy: Monolayer and multilayer arrangements (consisting of disorder, parallel alignment and perpendicular superlattice) of hydrophobic gold nanorods have been prepared on silicon substrates. The perpendicular superlattice assembly maximally enhanced intensities of surface-enhanced Raman bands in comparison with parallel and disorder assemblies. Moreover, multilayer films were more effective on SERS than monolayer films. The motive force should be the adequate resonance coupling of localized surface plasmon waves at the reasonable density of spaces between neighboring rods. Moreover, the adsorption ability of analytes on the hydrophobic peripheral octadecyltrimethoxysilane groups will also improve the detection limit and develop the detection scope from aqueous to organic solutions. This sensing technique can be easily used for investigating molecules in solutions, e.g. heterocyclic compounds in wastewater. (Toyoko Imae* and Xiaoming Zhang, JTICE, 45, 3081-3084 (2014).) 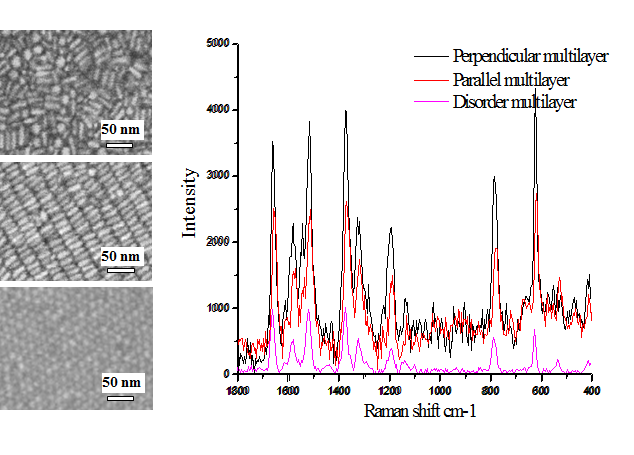 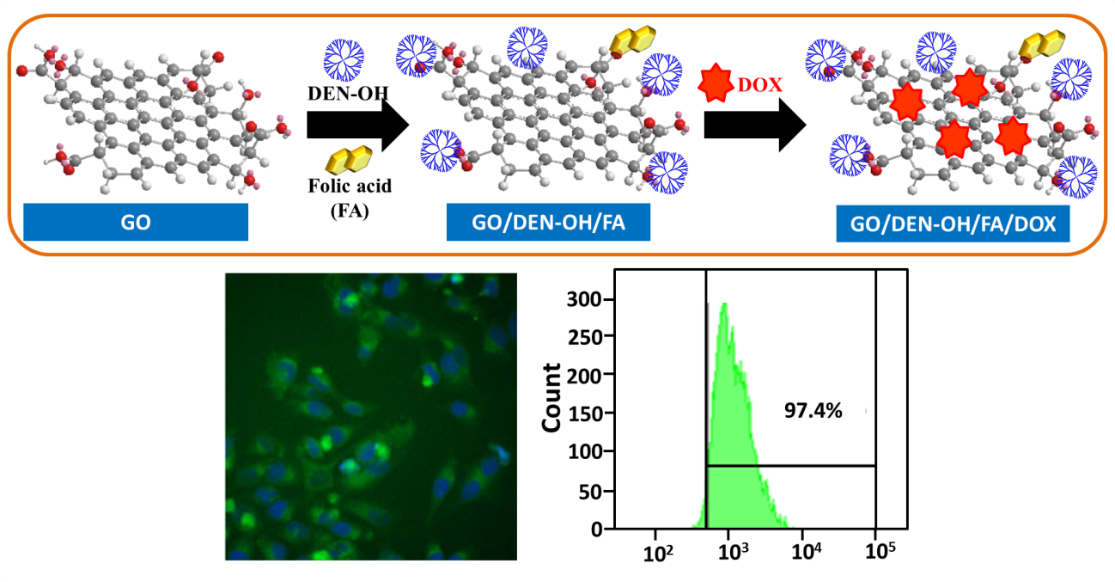 11. Preparation of graphene oxide/dendrimer hybrid carriers for drug delivery: It is necessary conditions that materials for biomedical applications must be principally nontoxic. Then we adopted hydroxyl-terminated poly(amide amine) dendrimer. Dendrimer was immobilized by amidation reaction on graphene oxide (GO). Folic acid was independently attached on graphene. Then graphene is a carrier platform loading dendrimers as its solubilizer (suspender) in water and folic acids as an attacker to the target cancer cells. Drugs can be mounted on graphene or dendrimer. Thus many drugs are carried at the same time on therapeutic cells, since they are localized on the delivery system. Cell cytotoxicity measurement demonstrated that this GO-based drug delivery system revealed low toxicity towards HeLa cells. Thus, these hybrid materilas might have a potential to use as a drug/gene carrier vehicles. (Ampornphan Siriviriyanun, Toyoko Imae,* Gabriela Calderó and Conxita Solans, Colloids and Surfaces B: Biointerfaces 121, 469-473 (2014).)

12. Visual Observation and Bioimaging Application of Fluorescent Poly(amido amine) Dendrimers: Since we have discovered the emission of blue fluorescence from poly(amido amine) (PAMAM) dendrimers, we characterized such luminescence. Especially, the visualization of fluorescent dendrimers is possible and indispensable for the utilization as an imaging agent. When an avidin molecule was labeled with these fluorescent dendrimers, it was confirmed by the observation of fluorescent dendrimers that avidin-bound fluorescent dendrimers interact selectively with biotins immobilized on the patterned substrates. (Govindachetty Saravanan,­ Kenji Daigo, Toyoko Imae,and Takao Hamakubo, Colloids and Surfaces B: Biointerfaces, 2011, 83 58–60.) On the other hand, the gene delivery and transfection toward rat C6 glioma cell lines were successfully evaluated by the blue fluorescence of PAMAM dendrimer. The fluorescent dendrimer revealed the lower vitro cytotoxicity toward C6 cells. The cellular uptake behavior could be directly analyzed by fluorescence microscopy and flow cytometry, without additional fluorescence labeling. Our preliminary results clearly indicated that fluorescent PAMAM dendrimers show the promise as gene/drug vehicles that can achieve delivery, transfection, and bioimaging at the same time. (Ya-Ju Tsai, Chao-Chin Hu, CHih-Chien Chu, and Toyoko Imae, Biomacromolecules, 2011, 12, 4283-4290.) This phenomenon is now applied to drug delivery systems.

14. Fabrication and Characterization of Dendrimer-Functionalized Mesoporous Hydroxyapatite: Since the first report of porous silica, the synthesis of porous materials is developed using various precursors. A successful synthesis of mesostructured hydroxyapatite (HAp) using poly(amido amine) (PAMAM) dendrimer porogens has been reported. The formation of a single-phase crystal in synthesized HAp particles was revealed. The formation of the mesostructural nature of HAp was proven with a specific surface area (56−63 m2/g) and a certain pore size (4.7−5.5 nm). In addition, on the surface modification of mesoporous HAp particles using PAMAM dendrimer, the coating thickness corresponded to at least a double layer of dendrimer at pH 9 or higher, but it decreased sharply with decreasing pH below 9, indicating the strong non-electrostatic interaction of nonionic dendrimer with HAp. (Nabakumar Pramanik, and Toyoko Imae, Lngmuir, 2012, 28, 14018−14027.) The research is expanded to functionalize these mesoporous HAp and apply to an appropriate chemical reaction. The developed dendrimer-functionalized mesoporous hydroxyapatites may also be applicable in biocomposite material and/or bone tissue engineering.

5. edited by Toyoko Imae, entitled “Nanolayer Research: Methodology and Technology for Green Chemistry” (Elsevier Science Publishers, Amsterdam, 2017) introduces the topic of nanolayer research and current methodology, from the basics, to specific applications for green science. Nanofilms are explained, along with their rapidly emerging applications in electronic devices for smart grids, units for cells, electrodes for batteries, and sensing systems for environmental purposes in applicable subjects 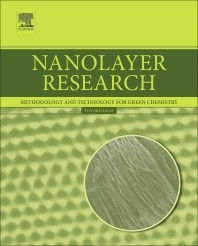 This site uses Akismet to reduce spam. Learn how your comment data is processed.

Welcome We have guests